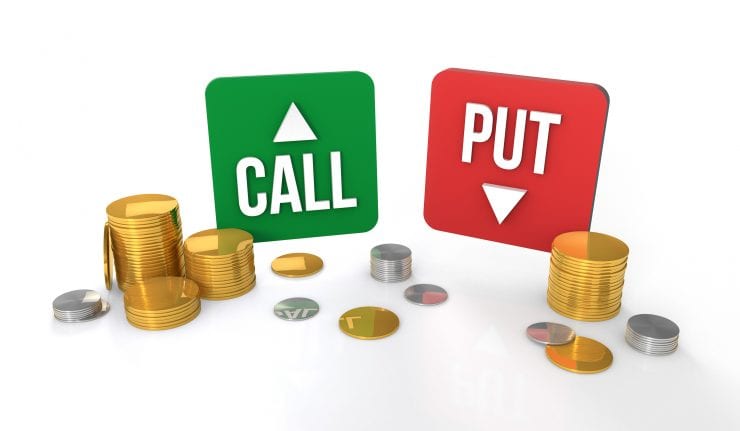 You should have already read the previous article on the Position Characteristics of Stock before proceeding with this article on Calls and Puts.

A call is a contract that gives you the right to buy a stock at an agreed upon price (the strike price) during a set period of time.

An example would be our favorite stock XYZ is at $50. You think that the price of it will move up, but you really don’t want to spend the $5000 to buy 100 shares of the stock. Most option contracts are for 100 shares of stock, so you could buy 1 call contract for the $50 strike for about $200. The $50 call is at $2, for 100 shares for a total of $200. Tonight XYZ announces that they have developed a cure for cancer, and the price of the stock opens tomorrow at $75. You have 2 things you can do. You could exercise the contract, and buy the 100 shares of stock at $50, and then sell the stock at $75 for an immediate profit, or hold the stock with the hopes it would go even higher. Or you could sell your call to someone else for around $25, netting yourself a tidy gain on that $200 investment.

A put works the same way, it is a contract giving you the right to sell a stock at the agreed upon (strike) price during a set period of time. If XYZ is at $50, and you buy the 50 put for $2, you would spend $200 to have the right to sell 100 shares at $50 each. Tonight XYZ announced that their new drug failed to get FDA approval, and it has been determined that instead of curing cancer, the drug actually causes heart attacks! So tomorrow morning XYZ opens at $25. Once again, you have 2 choices, to exercise the contract, sell the 100 shares of stock at $50 and have a “Short stock” position. Or you could sell your put to someone else for around $25 and pocket a tidy profit.

Sounds pretty easy and good, doesn’t it? The above example is one that will occasionally happen, but not very often. And in the above example the news came out right away. There is one major issue with buying calls and puts, and that is the issue of TIME!

Unlike a stock position, when you buy a call or put, it will lose value if the price is just moving sideways. So not only do you under perform the return a savings account would give you for your money, you actually wind up with less money. So with options, you not only have to pick the right direction, but you MUST have the price move in your favor.

There are some advantages of buying a call versus shares of stock, or a put instead of shorting shares of stock. The first is the leverage that you gain. If XYZ is trading at $50 share, to buy 100 shares it would take $5000. Depending on what strike is selected, and how many weeks are left until expiration, you could buy an At The Money call or put for around $2.00. An investment of $200. We will look at a more feasible move in the price of the stock, say just $5 in your direction. That would represent just a 10% profit for a stock position, but for the option position, after that 5 point move in the stock, you would be able to sell that contract for around $6, 3 time more than what you paid for it! So this leverage gives you a phenomenal return on your investment.

The other advantage of buying a call or put is that your risk is limited to the amount paid for the option. At the beginning of this article I laid out a scenario where news came out and had a very drastic impact on the price of the stock. What would happen if you just happened to be on the wrong side of this news? If your position consisted of stock, and it moved 25 points against you, that would result in a $2500 loss for a position of 100 shares. If you had spent that $200 for one options contract, and the stock moved 25 points against you, your total loss is just $200, the amount you paid to buy that contract.

If buying options is this easy and is so good, why do so many people lose so much money with options?

There are a few factors that come into play to answer this question. But mostly it can be summed up with one word, GREED. People are not content with the phenomenal results that are possible, and want even more. So they buy super cheap options. Instead of buying an At The Money option (or at least very near the money), and one with plenty of time left until expiration, they will buy one that is Out of The Money, and has very little time until it expires. Sure they may only pay 25¢ or 50¢ ($25 to $50 total expense) for this contract, but this selection leaves them with about the same prospects of making a profit as if they had went to a store and bought a lottery ticket.

Add to this, they will hold that position while the price is moving sideways or against them, and before long they can not “stop” out of it because there is no value left. It is primarily in the last 2 to 3 weeks before the contract expires that the time value will drop like a rock, especially if the strike price is out of the money.

Buying a call or call spread is a position that will take advantage of an upwards move in the price of the underlying stock or index. Because you are basically buying TIME when you buy an option these positions are not well suited to the very long term positions, UNLESS you are using a calendar spread, which will be looked at in a future article as it is an advanced and complex position. Buying a put or put spread takes advantage of a downwards move in the price, and is also effected by time, so is not well suited towards a very long term position. Options can be day traded, but it is difficult as most of them do have a wide spread between the bid and ask prices, so the underlying stock needs to make a significant move to overcome the spread and make the day trade worth while. This leaves the short to medium term trades that this type of strategy performs best in.

Due to the time value issue, you want to buy an option that has over a month before it will expire. This will allow for a few days for it to move sideways without losing a lot of the time value. And it will also allow the potential for a strong move to develop on the underlying stock. But even if the move only last for a few short days, a relatively small move of just a few points in the stock can translate to a 35% or better gain in the price of the option. I don’t know about you, but I think that is pretty good.